STAMFORD — A majority of New Haven Line customers gave Metro-North’s service a satisfactory rating this summer, but the number of riders who gave the railroad higher marks lags far behind Hudson and Harlem line riders, according to an annual questionnaire conducted in June onboard trains.

In all areas surveyed, the other Metro-North lines rider satisfaction outpaces that of New Haven Line riders.

Overall, the percentage of Connecticut riders who said they were “very satisfied” was only 26 percent compared to 47 percent on both the Harlem and Hudson lines.

The difference is less marked for riders who rank service as satisfactory or better, with New Haven Line riders at 88 percent, and the other Hudson and Harlem Line riders at 96 percent, according to the survey results, which will be presented to the Metropolitan Transportation Authority‘s Board Tuesday morning.

“The numbers are pretty consistent, despite the disruption of service and collision in Bridgeport, but it was before the Bronx track work and the Con Ed disruption,” Jim Cameron, a member of the Connecticut Rail Commuter Council, said. “I imagine if you did the survey today, it would be lower.”

Cameron said while the results reflect positive aspects of performance up through when it was taken in June, despite the May derailment, a survey done in the present might show mounting frustration over the Con Edison power failure that hobbled much of the New Haven Line for 13 days in late September. 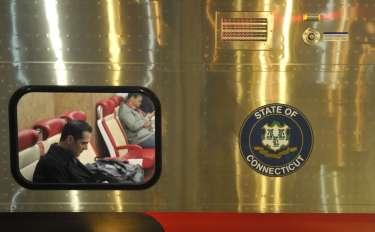 On Monday, commuters interviewed about Metro-North service said that delays related to track work seemed to impact commuters to Manhattan more heavily than those who traveled within the state.

Brian Mitchell, a Springdale commuter, said during the first week of the Con Edison power outage that reduced service by nearly 50 percent, he and several other Stamford commuters carpooled to White Plains, N.Y., to ride the Harlem Line.

Kathleen Alderman, who works for OW Bunker in Stamford and commutes from Bridgeport, said she believes rider demand warrants establishing one or more additional trains running express to and from Grand Central Terminal limited to the major outer New Haven stops like Fairfield, Bridgeport and New Haven.

“To me, the trains seem overly packed, and I think that might be due to employment trends,” said Alderman, who lives in Monroe. “More people are traveling a longer distance to their jobs, because the jobs which support their cost of living are closer to New York. The trains that stop in Stamford are overly packed.”

Responses also reflected riders as being more content with car conditions riding the state’s growing fleet of M8 cars compared to the state’s older rolling stock of M2, M4 and M6 cars. In the survey, 85 percent of the respondents were satisfied with the temperature on M-8 cars, compared to 75 percent on older trains, while 86 percent rated the cleanliness of the cars as satisfactory or better, compared to 66 percent given the older cars.

Metro-North President Howard Permut said in a statement the overall number of people who indicated they were satisfied or better with the New Haven Line service reflects well on the new cars as they arrive.

“We are pleased to see that our customer satisfaction remained high and that, in particular, our New Haven Line customers are pleased with their new railcars,” Permut said. “As more M8s are put into service, and as we complete our ongoing track work in the Bronx, we expect that satisfaction will continue to rise.”

Mitchell said the lighting and pristine condition of the new cars are more inviting, but also said fewer seats per car and less leg room are drawbacks to the new equipment.

“They were clearly not designed for 6-foot-tall, 200-pound men,” Mitchell said.

Israel Joffe, a New York City resident who works for Starwood Hotels in Stamford, said delays on the New Haven Line during rush hour from Grand Central Terminal to Stamford have not been dramatic, though trains during the evening peak are at times off schedule.

“For me, getting to work has been good,” Joffe said. “I can’t say I’ve had major problems.”